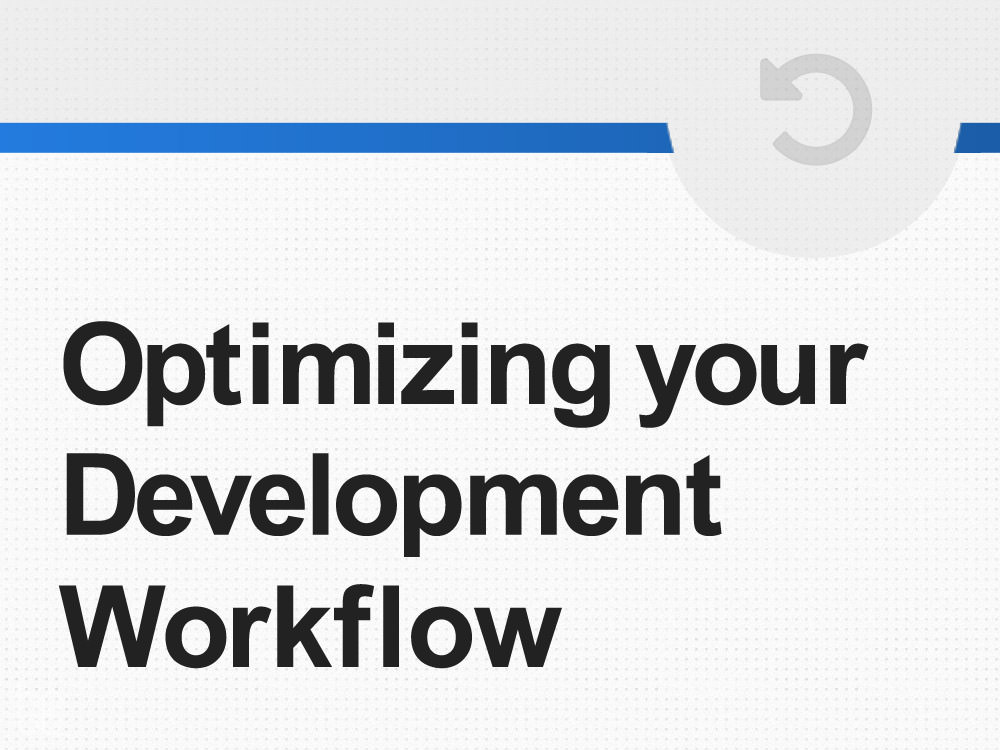 Most developers I know are hands on learners. The type of people who take things apart to understand how they work. While that approach is useful for garnering a deep understanding, it's not very conducive to retaining a comprehensive development approach. If you pick up tools here and there, you may eventually end up with an amazing array of tools... but you probably also have a messy workbench. Rethinking and refining your workflows and workflow patterns will ultimately give any developer a framework in which they can work most efficiently. Ultimately when your dealing with lots of code on a regular basis, efficiency is the name of the game.

It's important to keep in mind that workflows will always be unique to the user. The key factors I've kept in mind in with these suggestions are that everyone should be using tools that are unobtrusive, future-proof, device agnostic, and time saving. I've split these time savers into three categories and included detail and a simple workflow diagram for each. In order from least to most difficulty - Operational Streamlining will cover Applications and day-to-day tasks (Syncing Notes, Invoicing, etc.), Web Development Workflow will cover your basic local and remote servers (MAMP, Code Editors, Git Workflow, etc), and Command Line Utilities will cover core level time savers (Node, Bower, Grunt, etc). Now that we've got our scope, let's get cracking. 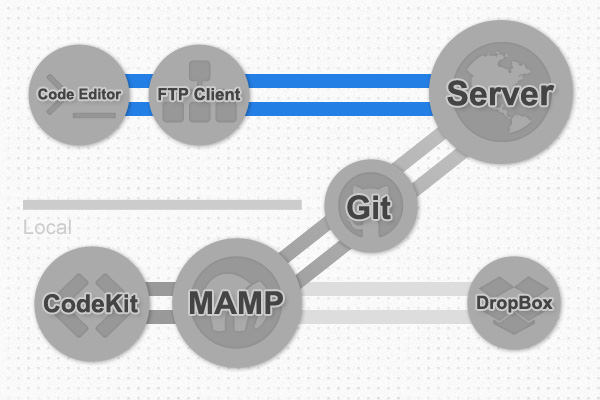 The exact setup you prefer is likely a little different, but we've included our workflow diagram to give you a basic approach. One constant is that you'll want to use a code editor / ftp client to communicate with your server. Another, that MAMP (or WAMP for you remaining Windows users) should be the core of your local testing environment. In our example, we've kept Dropbox as local backup and are utilizing Git to push revisions to the live server. Your approach depends on individual preferences, but these tips should be helpful for anyone.

Setup a Testing Server: Practice makes perfect and until you have your own testing server, you can't really practice web development. I wrote a tutorial on the topic of setting up MAMP, but the basics can be achieved using any stack setup. All the elements are usually already installed on an Apple (and most other computers), but using an application like MAMP (or WAMP for windows) gives you everything you need and makes it much easier to setup. By having your own independent "internet", you can run tests on every bit and piece of a websites code. The most obvious benefit is that you can keep the actual website live while you're testing revisions, but it's also helpful that you can work offline.

Use a Quality Code Editor and FTP Client: We all remember using a bootleg version of Dreamweaver. We've all convinced ourselves that Text Edit is a "pure" way to manage code. The reality is a decent code editor may cost a couple bucks, but ultimately the small investment pays off very quickly. Take a look at Coda, Sublime, or Atom and you'll see what I mean. When it come's to FTP exclusively - Filezilla is still pretty solid. Most advanced code editors have "built in" FTP functionality, but if you need to manage a ton of files and would prefer to do so in a separate app, Transmit is worth giving a look. You can always ssh into your server, but that's a little more advanced then our current scope.

Keep a Backup in Sync: Having a backup on hand is always important. I wrote a tutorial a while ago about using a MAMP setup that syncs w/ Dropbox that would be worth a read. When done properly, you can both retain and use that backup with a local server for testing. Similar approaches can be taken with other backup products, but the basic idea with any of these is to keep a live version of your databases & servers easily accessible when you need to reach them, but secure from prying eyes. 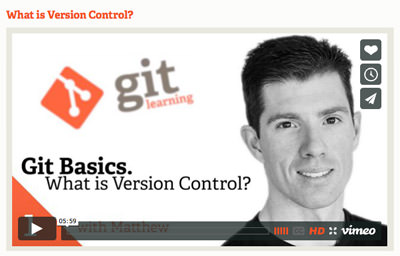 Git Familiar with Version Tracking:Think of version tracking as keeping a snapshot of your files. If you want to revert a website that you're working on to the way it was built last week, version tracking is what you should be using. A Git workflow is obviously a little more complicated then that, but if you take a minute and watch the attached video - you'll know all you need to know. If you absolutely detest the methodology, you can opt to use Mercurial or Subversion. I personally believe Git has a brighter future, but that's more of a philosophical opinion then concrete fact.

Supercharge your Development w/ CodeKit: When it comes to bridging the gap between working with a GUI and utilizing command level functionality, CodeKit is in a class of it's own. It's tagline says it all - It's like steroids for web developers. Besides being a great way to integrate added functionality into your development workflow, CodeKit also introduces you to several command line concepts in an easy to understand way. Basically - it's not only a valuable asset to smoothing your workflows, it's also a great instructional tool. I'd highly recommend purchasing it, but at the bare minimum give the demo a try.

Warning: Don't use command line utilities until you have a full understanding of what you're doing. You can do some major damage... Please Be Careful. 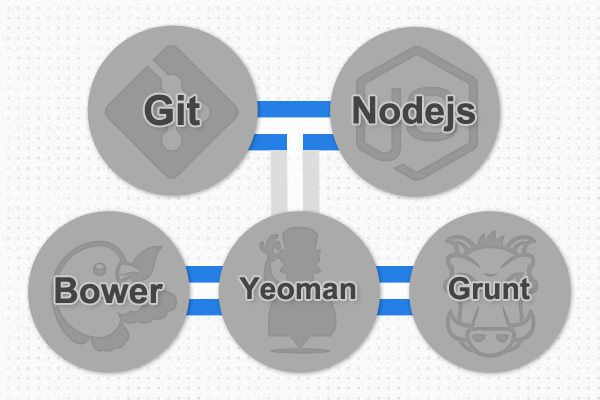 I have included a workflow diagram depicting the setup that we use around the office. When you get down to this level of streamlining though, every setup is truly unique. That said, these are certainly tools I'd recommend using or at least trying out. The first three I'll cover are intended to be installed at the core of your OS. Think of these as enhancements to your computer, whereas the command line utilities described later are enhancements used on a project level.

Let's Get to Work

Now that you have all the prerequisites installed, lets move along with the web development tutorial and address the command line streamlining utilities themselves. Don't forget that in order to add these tools to a specific project you'll want to cd into the folder you want to work with. This is an important distinction to make, so don't forget to relocate to your individual project folder before running the commands below. These tools are all device agnostic, but I'd also recommend using them remotely before trying them out on any live servers. As with the previous commands, you may need to sudo the code too (9 times out of 10, if you see an error that'll be the cause). If you're unfamiliar with the concept check Apple's Documentation, but it basically just means typing "sudo" before your command and typing your system password to verify your admin privileges.

If you're looking to master this Yeoman, Bower, and Grunt based workflow, I'd recommend taking a look at this tutorial from Newtriks, another from Treehouse, and this workflow tutorial from Tutsplus. If you can grasp the previous summaries along with these tutorials, you should be off to a solid start with these command line assets.

To Be Continued... Since these tools introduce an entire new language of options, we'll need to cover the detail in a future web development tutorial. Hopefully the steps we've covered will have gotten you up and running with the command line utilities and the documentation links included above should be insanely helpful for you.

Use What you Know and Never Stop Evolving

Efficiency is a never ending process, but the benefits you reap can make every day of your work better. Make a serious commitment to integrating the workflow patterns you find effective and feel free to add any in the comments below if you think they're helpful. If you've found this workflow tutorial helpful, please be sure to share with the social buttons below and as always - Thanks for stopping by!